Retirement is reportedly on the table for the Seahawks’ Cliff Avril, but that’s news to the injured defensive end. Avril told Jordan Schultz of Yahoo Sports on Wednesday that he is not considering walking away from football (Twitter link). 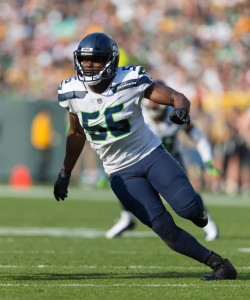 Head coach Pete Carroll announced Wednesday that Avril will go on injured reserve, noting that “he’s seeing a bunch of doctors” and is “seriously looking at a big decision.” Many deduced from Carroll’s comments that Avril was determining whether to continue his career, but those inferences were apparently incorrect.

“People are saying I’m retiring because of what coach Carroll said, but he’s referring to surgery,” Avril told Schultz.

Thanks to a serious stinger and numbness in his arm, Avril is likely done for the year, at the very least. He suffered the injury during the Seahawks’ win over the Colts on Oct. 1, forcing him to sit out their most recent game – a 16-10 victory over the Rams – the next week. Seattle, which is coming off a bye, is off to a decent start (3-2), but its defense ranks an uncharacteristically low 12th in DVOA and sits toward the bottom of the league in sacks (11).

Thanks in part to Avril and his 33.5 sacks, the Seahawks’ stop unit ranked between first and fifth in DVOA in each of the previous four seasons. But while Avril was a force during that stretch, he didn’t perform like his usual self early this season – which helps explain the decline the Seahawks’ defense has experienced. The 31-year-old picked up one sack in four games, and his performance ranks just 100th among 104th qualifying edge rushers at Pro Football Focus.

Even if Avril’s career isn’t in doubt, his future in Seattle looks uncertain. If the Seahawks don’t think the longtime sack artist will return to form, they could cut him in the offseason and save $7.5MM of his $8MM cap hit in 2018 – the final year of Avril’s contract.