Lions offensive lineman Joe Dahl has been designated to return from injured reserve and has resumed practicing, Detroit announced today. 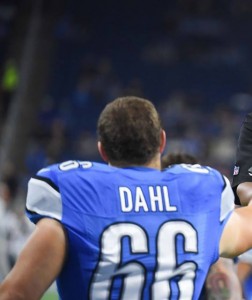 Dahl, 24, appeared in six games for the Lions in 2016 after the club selected him out of Washington State in the fifth round. He’d been expected to be in the mix for a starting role this season, but those hopes were dashed when Detroit inked free agent guard T.J. Lang to a three-year deal. Dahl was placed on injured reserve with a leg injury following Week 3.

As a whole, the Lions’ offensive line has been a disappointment, as the unit ranks 23rd in adjusted sack rate and 31st in adjusted line yards. Dahl certainly doesn’t boast much experience, but Detroit could conceivably place him at left guard and shift Graham Glasgow to center to replace Travis Swanson, who ranks as a bottom-three pivot, per Pro Football Focus. More likely, however, is that Dahl will become the Lions’ top reserve along the interior.

2 comments on “Lions OL Joe Dahl To Return From IR”