Buccaneers wide receiver Mike Evans has been suspended without pay for one game, the NFL announced. Evans’ “violations of unsportsmanlike conduct and unnecessary roughness rules” on Sunday against the Saints will keep him sidelined for the team’s upcoming game against the Jets. 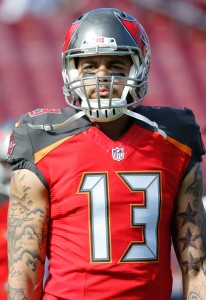 “During the third quarter, after a play had ended, you struck an unsuspecting opponent in the back, knocking him to the ground. Your conduct clearly did not reflect the high standards of sportsmanship expected of a professional,” NFL Vice President of Football Operations Jon Runyan wrote in a statement.

Per the terms of the Collective Bargaining Agreement, Evans may file for an appeal the suspension within three business days and he’ll do just that, as Ian Rapoport of NFL.com tweets. Appeals are heard and decided by either Derrick Brooks or James Thrash in cases of on-field player discipline.

Evans, 24, has topped 1,000 receiving yards in each of his first three NFL seasons. He’s on pace to do it again (532 yards through eight games) but the one-game ban will set him back a bit.

The Buccaneers will also be without quarterback Jameis Winston this week.