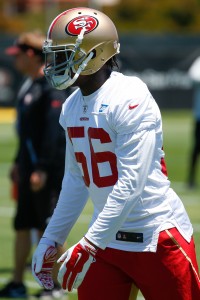 “The San Francisco 49ers organization is aware of the matter involving Reuben Foster,” the 49ers said in a statement (via Zenitz), “and we are currently gathering all relevant facts.”

A first-rounder in last year’s draft, Foster made an instant impact on the 49ers defense. The linebacker ultimately started each of his 10 games, compiling 72 tackles. His performance earned him NFL Defensive Rookie of the Month honors in November.

Foster had a standout collegiate career at the University of Alabama, but he saw his draft stock fall following several incidents at the scouting combine. The defender was sent home early after engaging in an argument with a hospital worker, and his urine sample was diluted (which is interpreted as a positive test). As a result, Foster was entered into the league’s substance-abuse program.