After seven seasons as the Cowboys’ linebackers coach, Matt Eberflus is set to receive his first coordinator opportunity. 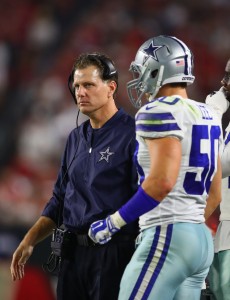 Once Josh McDaniels officially takes the Colts’ reins, he’s expected to bring Eberflus with him as his defensive coordinator, Tom Pelissero of NFL.com reports (on Twitter). Eberflus is a coaching free agent, so the Cowboys won’t be able to block this hire.

While the coaches have not worked together on an NFL staff, they are both Ohio natives, with Eberflus hailing from Toledo and McDaniels (son of a high school coach) growing up around the Cleveland area. Working under Rod Marinelli in recent years, Eberflus has coached Sean Lee for most of his career.

He’ll have a chance to oversee the development of a young Colts linebacking contingent. The Cowboys have run a 4-3 scheme under Marinelli, while the Colts have used a 3-4 look for the past several seasons. It will be interesting to see if they convert back to a 4-3 look under Eberflus.

Charean Williams of Pro Football Talk writes Eberflus, who took on the responsibility of passing-game coordinator in 2016, looked to be in line to succeed Marinelli in running Dallas’ defense. The Cowboys have lost several assistants this offseason.

2 comments on “Colts Expected To Hire Matt Eberflus As DC”