The Chargers will keep offensive coordinator Ken Whisenhunt for the 2018 season, a team source tells Eric D. Williams of ESPN.com. The Bolts made it a priority to keep him after the offense led the league in passing yards and Melvin Gordon broke out for 1,105 rushing yards. 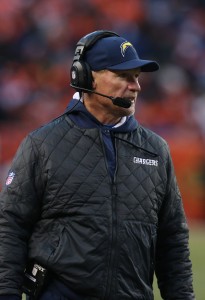 Los Angeles has managed to maintain continuity on the staff, despite Whisenhunt’s improved stock and widespread outside interest in defensive coordinator Gus Bradley. On Tuesday, L.A. inked a three-year deal with Bradley, keeping him from the Packers and other teams with DC vacancies.

Whisenhunt is in the midst of his second stint as the Chargers’ OC. His first run came in 2013, under then-head coach Mike McCoy. Whisenhunt left to become the Titans’ head coach for one-and-a-half seasons before returning in 2016. Although McCoy was ousted after the ’16 season, head coach Anthony Lynn kept him on staff.