Before the Raiders hired Jon Gruden, they interviewed a pair of minority candidates to satisfy the league’s Rooney Rule. Initially, the only coach identified was tight ends coach Bobby Johnson. We now know that the other “mystery” coach was USC offensive coordinator Tee Martin (Twitter link via Ian Rapoport of NFL.com). 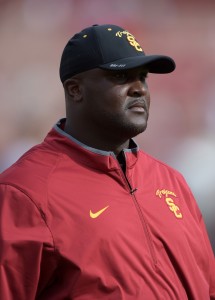 Martin, 39, played quarterback at the University of Tennessee and spent his first two years in college as Peyton Manning‘s backup. In 2000, he was drafted in the fifth round by the Steelers. His NFL career didn’t go as planned, but he did go on to spend time with the Eagles and Raiders. He also has the dubious distinction of being one of six QBs to be drafted before Patriots superstar Tom Brady in ’00.

This past year, Martin’s Trojans offense ranked 13th nationally. For all of his football acumen, it’s unlikely that he ever had a real chance of getting the Raiders’ head coaching job.