Titans Will Not Hire Ryan Day As OC

Mike Vrabel was just hired as the Titans next head coach, but it looks like he’s going to take some more time to hire his next offensive coordinator. Ohio State’s Ryan Day appeared to be the frontrunner in the Titans search, but he will not leave the Buckeyes for the opportunity to work in the NFL, a source tells Adam Schefter of ESPN.com (Twitter link). 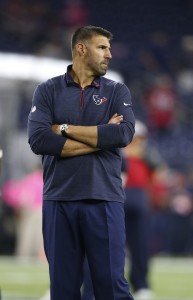 Being that Vrabel is a defensive-minded coach, this hire appears to be critical in determining Marcus Mariota‘s future success. Day was originally thought to be a good choice because of his familiarity with Mariota’s college offense being that he did work with Chip Kelly in his final season in Philadelphia. He also was the quarterback coach in San Francisco in 2016 before accepting a job with Ohio State.

With Day staying put, Vrabel could just reset his search with some many potential hires available in the open market. There were rumors yesterday that he had interest in Lions QB coach Brian Callahan for the role. But with other more experienced coaches like Ben McAdoo, Darrell Bevell and Mike McCoy still free agents there is no shortage of candidates to be considered.