Bracing to lose Pat Shurmur to the Giants, the Vikings are planning ahead as they make final preparations for Sunday night’s NFC championship game. 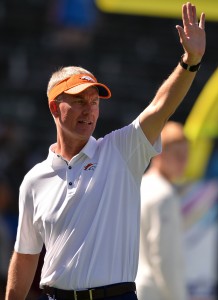 Minnesota is expected to consider the man Shurmur’s replacing with the Giants, Ben McAdoo, along with former Chargers HC Mike McCoy for their soon-to-be vacant offensive coordinator post, Ian Rapoport of NFL.com reports (on Twitter).

McAdoo is in the running for the Browns’ OC job after interviewing earlier this week. However, no reports out of Cleveland have pegged him as the frontrunner there. And Hue Jackson‘s presence as the top offensive coach with the Browns might make the Vikings a more attractive job. That and Minnesota’s superior offensive talent. The 40-year-old McAdoo served as the Giants’ OC for two seasons before being promoted to head coach.

Ousted as the Broncos’ offensive coordinator midway through his first year back in that job, McCoy was mentioned in the Bills’ OC search but never seriously considered. The 45-year-old McCoy served as Broncos OC from 2009-12 and this season, with an up-and-down Chargers tenure sandwiched in between.

One comment on “Vikings To Consider Ben McAdoo, Mike McCoy For OC Role”