Sebastian Janikowski‘s 18-year run with the Raiders has come to an end. On Wednesday, the Raiders informed the kicker that he will not be re-signed for the 2018 season, Adam Schefter of ESPN.com tweets. 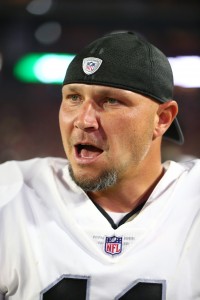 Last offseason, Janikowski initially balked when the Raiders asked him to take a pay cut, and that nearly marked the end of his tenure in Oakland. The kicker eventually acquiesced, but a preseason back injury kept him off of the field for the entire season.

Janikowski’s replacement, Giorgio Tavecchio, may have the inside track on the job, but new coach Jon Gruden could also open up a competition. Last year, the 27-year-old (28 in July), connected on 76.2% of his field goal tries and made 33 of 34 extra point attempts.

Before 2017, the 2000 first-round pick missed four games with the Raiders, and his 268 appearances are the most in franchise history. Despite his long-running history with team, the Raiders clearly had concerns about his age and possible decline. In 2016, Janikowski made 82.9% of his field goals and went 37-of-39 on extra point tries. He has not cleared the 83% mark on field goals since 2014. If not for the timing of the team announcing a move to Las Vegas, Janikowski might have been released before the 2017 season.

Janikowski turns 40 in March, but it seems likely that he’ll want to continue playing.

With Janikowski out of the picture in Oakland, Patriots quarterback Tom Brady stands as the only player from the 2000 NFL draft still with the team that drafted him.