Sam Bradford Intends To Play In 2018

Sam Bradford has made a considerable amount of money over his injury-plagued career but the former No. 1 overall pick has every intention of returning in 2018, according to Tom Pelissero of NFL.com (Twitter link). Bradford, 30, started the Vikings‘ first game of last season and was officially shelved for the rest of the regular season after attempting to make a Week 5 return from a knee injury. 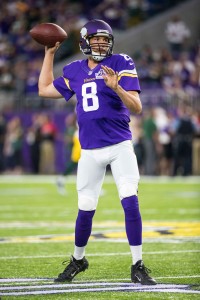 Bradford, who was activated in the postseason to serve as the Vikings’ No. 2 quarterback, is one of three Minnesota quarterbacks due to hit free agency, joining Teddy Bridgewater and Case Keenum. Since being taken by the Rams with the No. 1 overall pick in the 2010 draft, Bradford has made over $114MM.

To help alleviate the pain, Bradford had his knee cleaned out and a bone spur shaved by Dr. James Andrews in November. Bradford appeared in 15 games for the Vikings in 2016, which were the most for him since starting all 16 games for the Rams in 2012. Andrews told Bradford his knee joint was in good shape and his ligaments were intact following the November procedure and that he shouldn’t have any fears about the knee heading into free agency, per Pelissero.

The Vikings were 9-8 over the last two seasons when Bradford was under center. His completing percentage of 71.6 last season was the best of his career for a season in which he appeared in at least ten games. Along with the Vikings, the Cardinals, Broncos, Jets, Bills and Browns make up a sampling of teams who could be looking for a quarterback in free agency this offseason.