The Colts have signed offensive lineman Matt Slauson, according to Adam Caplan of ESPN.com (on Twitter). It’s a one-year deal worth $3MM, tweets Ian Rapoport of NFL.com. 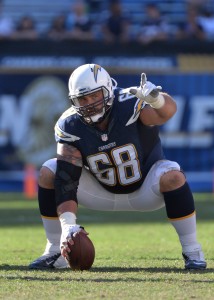 Slauson, 32, started seven games at left guard the Chargers before he was sidelined in October with a biceps injury. He also offers previous experience at center and could be an option in the middle should Ryan Kelly miss time again.

Free agent Jack Mewhort continues to float in free agent limbo and it’s not clear if he’ll be retained. If he is brought back into the fold, the Colts could have the two veterans compete in camp to see who will start at one guard spot opposite of Joe Haeg. Last season, Jeremy Vujnovich started all 16 games at left guard, but he graded out as Pro Football Focus’ worst qualified player at the position.

The Lions met with Slauson last week, but he’s headed to Indianapolis instead.