DeMarco Murray To Meet With Lions

Former Titans running back DeMarco Murray is scheduled to visit the Lions on Monday, a source tells Adam Schefter of ESPN.com (on Twitter). Murray secured his release from Tennessee on Thursday, making him eligible for free agency right away. 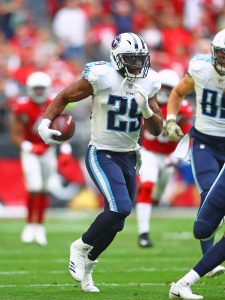 Murray, 30, is coming off of a down season in which he amassed just 659 yards and averaged 3.6 yards per carry. On a per-tote basis, it matched the career low he set in his lone season with the Eagles. He did have 39 catches for 266 yards, however, and may be capable of getting back to his old form with a new team.

The Lions are in serious need of help in the backfield after finishing at or near the bottom in every statistical measure of rushing. Detroit owns the No. 20 selection in this year’s draft, but they may prefer to use that pick to bolster their pass rush or another area of the team.

Last year, Murray graded out as Pro Football Focus’ No. 40 running back in the league. That’s nothing to write home about, but pass-catching specialist Theo Riddick (No. 24) was the only Detroit RB to place higher.

6 comments on “DeMarco Murray To Meet With Lions”