The Raiders have reached an agreement with free agent linebacker Emmanuel Lamur, according to Michael Gehlken of the Las Vegas Review Journal (Twitter link). 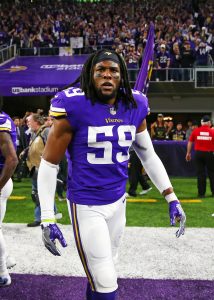 Lamur had also been scheduled to meet with the Dolphins later this week, but Oakland never let him leave its building without a contract in hand. The Raiders employ former Bengals coaches Paul Guenther and David Lippincott as defensive coordinator and linebackers coach, respectively, so Lamur — who played for Cincinnati from 2012-15 — should offer scheme familiarity.

While Lamur once started 13 games and played 91% of the Bengals’ defensive snaps, he’s been relegated to backup/special teams duty since that 2013 campaign. Last season, Lamur appeared in all 16 games for the Vikings (who also have another former Cincinnati coach — Mike Zimmer — at the helm), but only played 78 defensive snaps.

Despite his lack of production in recent campaigns, Lamur could have a decent shot at playing time in Oakland given the club’s lack of options at linebacker. While the Raiders recently signed fellow free agent Tahir Whitehead, they could lose NaVorro Bowman to the open market, while Bruce Irvin is expected to see most of his time at defensive end.