The Ravens are expected to sign free agent wideout Ryan Grant, per Ian Rapoport of NFL.com (Twitter link). It’s a four-year deal worth $29MM ($14.5MM guaranteed), and Grant will earn a $10MM signing bonus. This is the second receiver Baltimore has added today, as they agreed to a deal with free agent John Brown this evening. 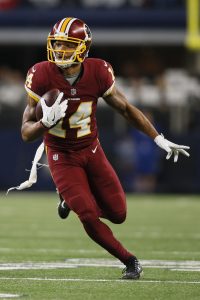 With Mike Wallace hitting free agency and Jeremy Maclin being mentioned as a cap casualty, the Ravens have been seeking veteran additions at wide receiver. They certainly found an intriguing option in Grant, who had a breakout season in 2017. The former fifth-rounder finished the campaign with 45 receptions for 573 yards and four touchdowns. Pro Football Focus ultimately ranked Grant 57th among 116 cornerback candidates. The Redskins had previously expressed interest in retaining the wideout.

If Maclin is let go, Grant will likely slide behind Brown on the depth chart. The Ravens are also rostering Chris Moore and former first-rounder Breshad Perriman, among others.