The Vikings have restructured the contract of running back Latavius Murray, according to Courtney Cronin of ESPN.com (Twitter link). Murray agreed to a reduced base salary for 2018, though his salary is guaranteed, according to Mike Florio of PFT (on Twitter). Meanwhile, the last year of his contract was wiped out. He is now due to be a free agent in 2019. 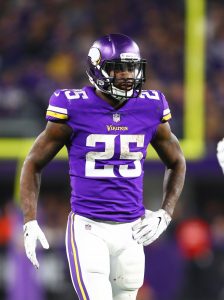 In 16 games (11 starts), the 28-year-old ultimately finished the campaign with 842 yards and eight touchdowns on 216 carries (3.9 yards per carry). Pro Football Focus ranked Murray 26th among 58 eligible running backs. The former sixth-round pick has proven to be reliable in the red zone, as he rushed for 12 touchdowns with the Raiders in 2016.

The adjustment helped Minnesota clear some cash in order to sign Sheldon Richardson.