49ers linebacker Reuben Foster is facing multiple felony charges and one misdemeanor in relation to a February incident, according to a press release from the Santa Clara District Attorney’s office. If convicted, he’ll face more than eleven years in prison. 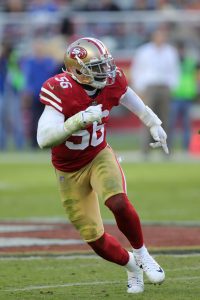 Foster faces charges of domestic violence with an allegation that he inflicted great bodily injury, forcefully attempting to prevent a victim from reporting a crime, and possession of an assault weapon, all of which are felonies. He is also charged with misdemeanor possession of a “large capacity weapon magazine.” Foster will be arraigned in California on Thursday afternoon.

Per the DA’s office, Foster’s victim “told responding sheriff’s deputies and Los Gatos police that Foster dragged her by her hair, physically threw her out of the house, and punched her in the head eight to ten times.” In response, the 49ers released a statement indicating that Foster will be jettisoned if he his found guilty of the more serious charges:

“The 49ers organization is aware of today’s disturbing charges regarding Reuben Foster. We will continue to follow this serious matter. Reuben is aware that his place in our organization is under great scrutiny and will depend on what is learned through the legal process.”

Foster made an impact right out of the gate as a rookie in 2017, tallying 72 total tackles in ten games (all starts). In November, he earned NFL Defensive Rookie of the Month honors and appeared to be on track for a promising NFL career. Right now, his football future is very much in jeopardy.