Safety Eric Reid met with the Bengals on Monday to discuss football as well as some non-football matters. Bengals owner Mike Brown personally met with Reid and asked him whether he’ll kneel during the 2018 season, Mike Florio of PFT hears.Â 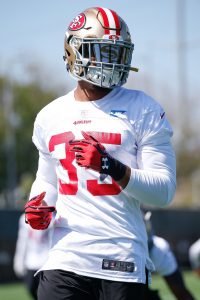 Reid, who previously indicated that he will not kneel this year, was unwilling to commit on the spot.Â He ultimately left without an offer, even though he sensed that defensive coordinator Teryl Austin and other coaches were interested in signing him and didn’t care much about his anthem protests.

However, late in the visit, head coach Marvin Lewis asked Reid if he wants to clarify anything that Reid told ownership regarding the anthem. Reid said that he had nothing to add and the visit ended soon after.

Things have stalled in free agency for Reid and it’s likely that his participation in protests during the national anthem are a factor. Reid is reportedly willing to return to the Niners on a one-year deal and that may wind up being his best option. There have been some discussions on that front, Mike Garafolo of NFL.com (on Twitter) hears, though SF pitched a deal for a lower guaranteed rate than the one he had in 2017. Reid, meanwhile, wants to match his $5.676MM salary from last year, according to Florio.