The Cardinals will host free agent edge defender Connor Barwin this week, according to Adam Schefter of ESPN.com (Twitter link). 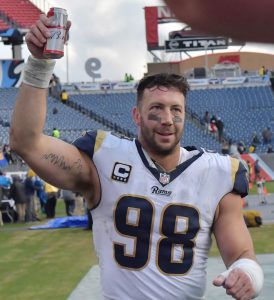 PFR ranked Barwin as a top-10 free agent pass rusher when the market opened roughly a month ago, and while he remains arguably the best edge defender still available, he’s drawn little interest thus far. The Rams reportedly expressed interest in re-signing Barwin in mid-March, but there haven’t been any developments on that front.

A robust market should have never been expected for Barwin, especially given that he’s entering his age-32 campaign and coming off one of the worst seasons of his career. While he played on 71% of Los Angeles’ defensive snaps a year ago, Barwin graded as the third-worst pass rusher in the NFL among 106 qualifiers, per Pro Football Focus.

If signed by Arizona, Barwin would slot in as a reserve for a defense that ranked 17th in pressure rate and 24th in adjusted sack rate in 2017. Given that NFL sack leader Chandler Jones and Markus Golden project as the Cardinals’ starting outside linebackers, Barwin could take over for Kareem Martin (who signed a three-year deal with the Giants) as Arizona’s rotational edge rusher.

2 comments on “Cardinals To Meet With LB Connor Barwin”