Veteran defensive tackle Terrell McClain is visiting the Dolphins today, a source tells Ian Rapoport of NFL.com (on Twitter). McClain was released by the Redskins after the draft. 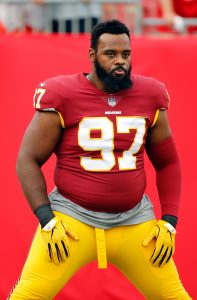 McClain was being pushed out of D.C. after the Redskins selected two defensive linemen in Da’Ron Payne (first round) and Tim Settle (fifth round). McClain appeared in 12 games with two starts for the Redskins last year, but he did not make a mark in his first season in the nation’s capital. He graded out as one of the three worst qualified defensive tackles in the NFL last year, per Pro Football Focus, though he did manage two sacks from the interior.

The Dolphins’ defensive line got a serious makeover this offseason thanks to the departure of Ndamukong Suh and the acquisition of Robert Quinn. Then, on Wednesday, they traded for one potential starter in defensive tackle Akeem Spence.

If the Dolphins don’t sign McClain, the Cowboys could be among the clubs to show interest in the veteran. McClain spent three years with Dallas and started in all 15 of his games in 2016. In that season, he managed 2.5 sacks from the interior and 39 total tackles.