Free agent tight end-turned-offensive lineman Crockett Gillmore is not only attempting to work through a position switch, but recovering from offseason surgery, as Jeff Zrebiec of the Baltimore Sun reports. Gillmore, who underwent an August procedure to repair a torn MCL, also had another knee operation done at some point earlier this year. 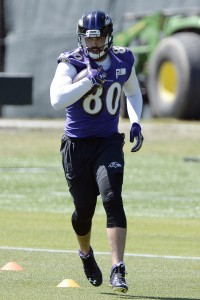 Gillmore, 26, spent the first four years of his career as a tight end for the Ravens, but multiple injuries repeatedly kept him off the field. After posting a career-best season in 2015 (33 receptions, 412 yards, four touchdowns), Gillmore managed only seven games in 2016 before going down with the aforementioned MCL injury.

As Zrebiec has indicated at various points this offseason, Baltimore still has interest in re-signing Gillmore, who has been on the open market since March. The Ravens are largely set across their offensive line after re-signing James Hurst and using a third-round pick on Orlando Brown, but the club could still have room for Gillmore as a reserve. Baltimore, theoretically, should have the most recent and accurate information regarding Gillmore’s health.

Whether any other team will be willing to consider Gillmore is unclear. Clearly, his injury history will limit his overall market and earning capacity, at least in the near term. But Gillmore’s positional change is the more intriguing matter at hand, and just how many clubs are open to signing him as an offensive lineman is an open question.