The Titans have agreed to terms with first-round linebacker Rashaan Evans, according to Mike Florio of Pro Football Talk (Twitter link). 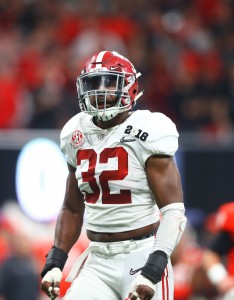 Tennessee moved up on draft night in order to land Evans, shipping a fourth-round pick to the Ravens in order to move up three spots (the Titans also acquired a sixth-round selection in the exchange). The Patriots were reportedly also eyeing the Alabama product, forcing the Titans to trade up to pick No. 22 in order to secure Evans.

Evans will likely be a starter from Day 1, and he’s currently penciled in to play inside linebacker alongside veteran Wesley Woodyard. Although Evans excelled as a pass-rusher at Alabama, the Titans are mostly set at outside ‘backer with Derrick Morgan and Brian Orakpo. It’s conceivable, however, that Evans will be asked to get after opposing quarterbacks, particularly in sub packages.

Like every first-round pick, Evans will sign a four-year deal that contains a fifth-year option. Evans’ pact will be worth roughly $11.578MM and includes a $6.45MM signing bonus, per Over the Cap. Tennessee previously inked rookies and Dane Cruikshank Luke Falk, leaving second-round edge defender Harold Landry as the team’s lone remaining unsigned draft pick.