Buccaneers left tackle Donovan Smith suffered a sprained knee during practice and is projected to miss two-to-four weeks, according to Ian Rapoport of NFL.com (Twitter link). 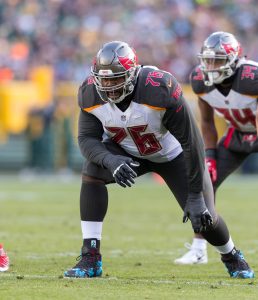 Tampa Bay’s regular season kicks off in just under three weeks, so Smith may indeed miss game action depending on his recovery time. That’s not good news for the Buccaneers, who will open the campaign not only without starting quarterback Jameis Winston (who will be serving a thee-game suspension), but three difficult opponents in the Saints, Eagles, and Steelers.

Smith, 25, has started 48 consecutive games since being selected 34th overall in the 2015 draft. Pro Football Focus has consistently graded Smith as a middling option: last season, PFF ranked the Penn State as the No. 45 tackle among 79 qualifiers.

Third-year pro Leonard Wester who’s played fewer than 90 snaps in his career, is currently Smith’s top backup at left tackle, and would take over if Smith is forced to miss time. The Buccaneers’ offensive line ranked 16th in Football Outsiders’ run- and pass-blocking metrics, and has since added free agent center Ryan Jensen and third-round right guard Alex Cappa.