At least two teams have expressed interest in trading for Jets quarterback Teddy Bridgewater, Manish Mehta of the Daily News hears. Still, there have been no concrete offers just yet, so there’s still some work to be done before the mobile QB is potentially moved. 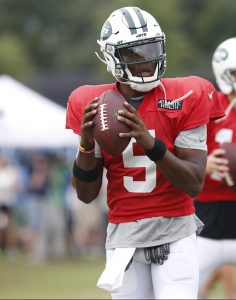 After a devastating injury wiped out Bridgewater’s 2016 season and nearly ended his career, the QB landed with the Jets this offseason on a one-year, $6MM deal. Bridgewater has impressed and shown no ill effects from that malady, but the Jets are willing to listen to offers since rookie Sam Darnold has also performed well. Multiple teams are eyeing Bridgewater as a top flight insurance policy under center, and the Jets can afford to part with him thanks to the presence of veteran Josh McCown.

We don’t know which teams have called on Bridgewater, but there are several clubs around the league that could use a good fallback option. Two of those clubs – the Patriots and Dolphins – are in the Jets’ division, and it’s unclear whether GM Mike Maccagnan would be willing to make a deal with an AFC East rival. Speculatively, the Broncos,Jaguars, Steelers, and Panthers could also see Bridgewater as a fit.

Through two preseason games, Bridgewater has completed 17-of-23 passes for 212 yards with two touchdowns against one interception.