The Giants still have four quarterbacks after trimming their roster to 53 players yesterday, but the team will obviously not go into Week 1 with four signal-callers. As Ryan Dunleavy of NJ.com reports, Big Blue is open to dealing either Davis Webb or Kyle Lauletta. 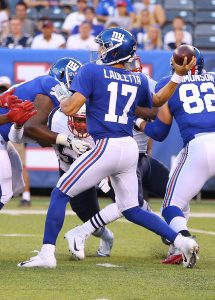 The Giants selected Webb in the third round of the 2017 draft, but new head coach Pat Shurmur and new GM Dave Gettleman do not have any ties to the California product. They do have ties to Lauletta, who was selected in the fourth round of this year’s draft, so it would certainly be surprising if they chose to trade the former Richmond QB.

Nonetheless, it was Lauletta, and not Webb, who played in the team’s final preseason game, so the Giants could have been preserving Webb as a trade chip, they could have been showcasing Lauletta to bolster his trade value, or both. If New York is able to find a taker for either young QB, 30-year-old Alex Tanney would likely remain as the team’s No. 3 QB, as Shurmur prefers to keep three quarterbacks on his roster.

Of course the Giants could elect to keep both Webb and Lauletta and continue to groom them for the future while cutting Tanney in favor of a player at a position of need like cornerback or defensive line.