Panthers TE Greg Olsen To Return In A “Few Weeks”

The timeline on Panthers tight end Greg Olsen‘s return from a fractured foot isn’t as dire as it originally appeared. Olsen says he’ll rest his foot for a “few weeks” and then return to play out the season, according to Adam Schefter of ESPN.com (Twitter link). 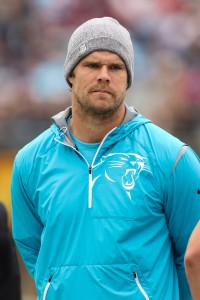 That’s an incredibly more positive outlook for Olsen, whom reports earlier today would be evaluated on a month-to-month basis. Olsen missed significant time in 2017 — and was eventually placed on injured reserve — after breaking the same foot, so a lengthy absence appeared likely. But Olsen won’t undergo surgery, as he’s confident an operation can wait until this offseason.

A quick return means Olsen will be viewed as an injury risk for the remainder of the year, as both his age (33) and his foot issue give reason for concern. But his presence will undeniably be essential for the Panthers, as the club doesn’t have the tight end depth to withstand a missing Olsen. With longtime Carolina tight end Ed Dickson now in Seattle, the Panthers will turn to rookie Ian Thomas and veteran Chris Manhertz until Olsen can get back on the field.

Olsen, who in April signed an extension through 2020, has been among the league’s best tight ends since joining the Panthers via trade in 2011. From 2014-16, Olsen earn Pro Bowl honors while topping 75 receptions and 1,000 yards in each campaign.