Rams cornerback Marcus Peters is believed to have suffered a calf strain that could sideline him for two to four weeks, Ian Rapoport of NFL.com (on Twitter) hears. The good news is that the initial tests show no structural damage, so it shouldn’t be a long-term absence for the standout corner. 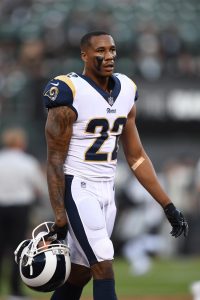 The Rams acquired Peters from the Chiefs this offseason in exchange for second and fourth-round picks. In terms of talent, Peters is one of the league’s very best young cornerbacks, but Kansas City grew tired of the headaches.

The Rams, so far, have been treated to the good side of the 25-year-old. Peters nabbed a pick six in the team’s Week 1 win over the Raiders and has graded out as a top-30 cornerback through three weeks, according to Pro Football Focus.

Veteran Sam Shields saw 37 snaps on Sunday and wound up leading all L.A. corners in that area as Peters and Aqib Talib (ankle injury) were forced out of action. Shields is a good bet to move into the starting lineup, but the Rams may also need to bolster their cornerback group with an outside addition.