Giants Could Keep Eli Manning In 2019

There is still a chance that Eli Manning could return to the Giants as their starting quarterback in 2019, Ralph Vacchiano of SNY hears. While the offense has sputtered under Manning’s command, the Giants do not have a clear replacement for him, so the possibility of another season together cannot be ruled out. 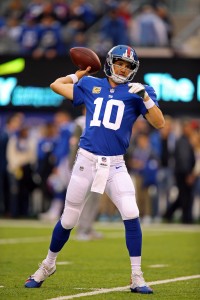 Obviously, the Giants will be keeping close tabs on Manning’s performance over the final five games of the season. They also have to weigh the fiscal consequences of keeping him. Manning is signed through next year at a salary cap number of $23.2MM, which is a lot for a soon-to-be 38-year-old quarterback in decline.

The Giants may want to use these final five games as an opportunity to see what fourth-round pick Kyle Lauletta has to offer. If Lauletta sees the field and plays well, the Giants may gain enough confidence to move on from Manning.

The stats indicate that Manning is having a solid season on the whole, but the Giants’ offense has struggled to put points on the board. The veteran has completed 69% of his passes with just seven interceptions and he’s on pace for one of his best career totals in passing yards. Manning has also played better over the last three weeks thanks to improved protection from the offensive line. Still, he’s thrown only 14 touchdown passes through eleven games and the Giants’ offense is averaging only 21.5 points per contest.

Manning will look to keep it up against the Bears on Sunday. If the game gets out of hand, we could be one step closer to seeing what Lauletta has to offer.