The Redskins have agreed to sign free agent quarterback Mark Sanchez, according to Ian Rapoport of NFL.com (on Twitter). Sanchez worked out alongside a number of QBs on Monday and apparently made the strongest impression on team brass. 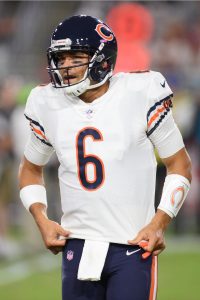 Its been roughly a decade since Sanchez entered the league as the No. 5 overall pick in the 2009 draft and secured a five-year deal worth up to $60MM from the Jets. Lauded as a strong leader and a quality game manager, Sanchez was under center for back-to-back AFC Championship game appearances in his first two NFL seasons.

Since then, however, Sanchez’s career has been in decline. He has not attempted an NFL pass since his 2016 season with the Cowboys and he spent the 2017 season as a benchwarmer for the Bears. This past spring, he was hit with a four-game ban for violating the NFL’s performance-enhancing drug policy. Unfortunately, Sanchez’s success in New York is a distant memory and the 32-year-old is remembered more for the infamous buttfumble than anything else at this point.

The Redskins’ quarterback plans were turned upside down this week when starter Alex Smith suffered a broken tibia and fibia. Sanchez will now serve as the one and only backup to Colt McCoy, who just attempted his first throw since 2015.