Titans defensive coordinator Dean Pees was taken to a local hospital after suffering a “medical issue” during today’s game against the Colts, the club announced. 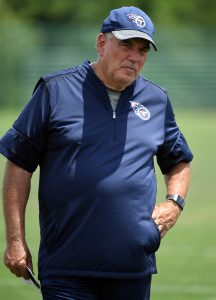 Pees, 69, previously announced his retirement in January after six seasons as the Ravens’ defensive play-caller, but he changed his mind about continuing his NFL career after Mike Vrabel was hired as Tennessee’s head coach. Pees was hired as the Titans’ defensive coordinator at the end of January, and has led a defense that currently ranks in 12th in DVOA.

While it’s unclear who is currently calling defensive plays for the Titans, Vrabel does have experience as a DC. PFR extends it best wishes to Pees and wishes him a speedy recovery.

One comment on “Titans DC Dean Pees Taken To Hospital”