At full strength, the Broncos feature one of the deepest edge-rushing groups in the NFL. That appears set to change going into 2019.

Both Shaquil Barrett and Shane Ray are headed for free agency. Ray has been a healthy scratch the past two games, and Barrett no longer has intentions of being a backup. The UDFA success story said (via The Athletic’s Nicki Jhabvala, on Twitter) he will be eyeing a team that will give him a starting role. With Von Miller and Bradley Chubb entrenched as Broncos starters, Barrett’s probably about to play his final game as a Bronco on Sunday. 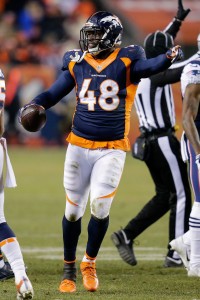 “I want to start. I want to be a guy somewhere. I don’t want to just be a role player,” Barrett said. “I can’t do it. … Reserve role is done for me, unless that’s the only role I got after this year. But that’s not what I’m looking for going into free agency.”

Barrett has never been a high-end sack artist, but then again, the Colorado State product has not enjoyed a consistent starting opportunity. A plus run defender, Barrett may still receive a chance to start in free agency. Pass rushers Jadeveon Clowney, Dee Ford, DeMarcus Lawrence, Frank Clark and Ziggy Ansah are slated for free agency. Only Ansah figures to be a lock to reach the market. Teams annually retain top-tier pass rushers, opening the door for players on Barrett’s level to cash in.

Brandon Graham, Trey Flowers, Brian Orakpo, Bruce Irvin, Preston Smith, Markus Golden and Clay Matthews do make 2019 an interesting year to need a pass rusher. Some of these players will reach free agency. Barrett has seven sacks over the past two years and did start nine games in 2017 but played behind DeMarcus Ware and now Chubb for full seasons as well. Denver slapped a second-round RFA tender on Barrett this year.

The Broncos have Barrett, Ray, Matt Paradis, Bradley Roby and Jared Veldheer among a deep group of UFAs-to-be. The only way it appears Barrett will cycle back to Denver is if his market underwhelms.