With the Rams facing a potential cupcake matchup against the Cardinals this afternoon, the team has decided to sit one of their top offensive weapons. ESPN’s Lindsey Thiry reports (via Twitter) that running back Todd Gurley will not play against Arizona today. 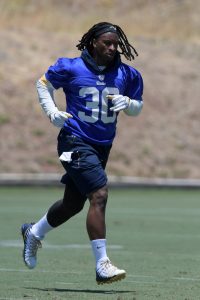 The All-Pro running back did not practice this week after experiencing knee inflammation during last weekend’s loss to the Eagles. Gurley still finished that contest with 48 rushing yards and two scores, and there was some optimism that he’d be ready to go today. However, when you consider the Rams’ current playoff position, the decision isn’t all that surprising; the team has a pair of easy matchups to end the season, and they’re effectively two games back of the Saints in the home-field advantage race. Ultimately, it makes a whole lot more sense for the team to assure that Gurley is completely healthy heading into the postseason.

Of course, that’s not to say that the Rams won’t miss his presence on offense. The 24-year-old was having another standout season in 2018, compiling 1,251 rushing yards and 17 touchdowns on 256 carries. He also added another 59 receptions for 580 yards and four scores.

With backup Malcolm Brown on the injured reserve, the Rams’ running back depth chart is a bit in flux. The team will roll into today’s game with three healthy backs: former undrafted free agent Justin Davis, sixth-round rookie John Kelly, and recently-signed veteran C.J. Anderson. While Gurley still played the majority of the snaps last week, Kelly and Davis ended up splitting the rest of the reps. Despite having less than a week of practice with his new team, there seems to be some chatter than Anderson will take over as the Rams’ lead back.