Dolphins guard Josh Sitton expects to be released this offseason, according to Armando Salguero of the Miami Herald. Sitton has one year remaining on the two-year, $15MM deal he inked with the club last year. 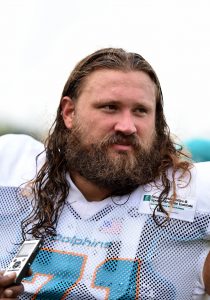 Sitton, 33 in June, suffered a season-ending torn rotator cuff injury in the very first game of the 2018 season. It was undoubtedly frustrating for the veteran who had been largely healthy over the course of his previous nine NFL seasons.

Sitton may not match the value of his last contract, but he should find plenty of suitors on the open market. In 2017, his final year with the Bears, Sitton graded out as the fifth-best guard in the league, per Pro Football Focus, and the advanced metrics show that he’s been consistently solid throughout his career.

If the Dolphins cut Sitton, they’ll save $5MM against the 2019 cap with $2MM left in dead money. They may also have to replace pending free agent tackle Ja’Wuan James, which would revamp the right side of their line.

3 comments on “Dolphins’ Josh Sitton Expects To Be Released”