Kareem Hunt‘s one-year deal with the Browns includes a base salary of $645K, a $25K per-game roster bonus for each game that he is active, and a $55K offseason workout bonus, Field Yates of ESPN.com tweets. It’s not exactly a top of the market deal for a running back, but it’s actually a better deal that the one Hunt had with the Chiefs prior to his release. 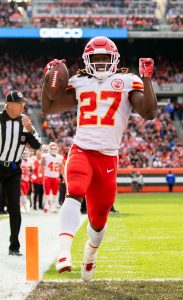 Hunt will be able to earn $420K more from the Browns on a new contract than he would under his his old contract, had he been claimed, as Jason Fitzgerald of Over The Cap notes (on Twitter). There’s also upside for next year – Hunt will have the ability to earn more as a restricted free agent in 2020 than he would have as a fourth-year rookie.

The Browns’ decision to sign Hunt has stirred up some controversy and the details of his new deal won’t help ease the criticism. Recently, GM John Dorsey admitted the Browns’ investigation into Hunt’s past did not include speaking with the victim of his hotel assault, which didn’t help matters.

“I talked to a lot of people (but) I didn’t get a chance to talk to that victim,” Dorsey said, via Mary Kay Cabot of cleveland.com. “That’s probably part of her privacy stuff.”

Hunt won the 2017 rushing title with 1,327 yards on the ground. Prior to his Kansas City departure last year, he compiled 1,202 yards from scrimmage and scored 14 total touchdowns in eleven games.

22 comments on “Details On Kareem Hunt’s Deal With Browns”