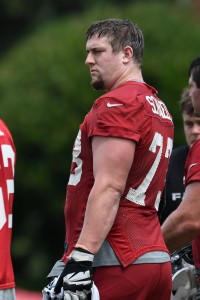 Schraeder was fully expected to be cut after Atlanta gave Ty Sambrailo — who took over as the club’s starting right tackle near the end of the 2018 season — a three-year extension. The Falcons will field an offensive line that features three new starters next year: Sambrailo, plus free agent guards Jamon Brown and James Carpenter, the latter two of whom agreed to multi-year deals earlier this week.

A former undrafted free agent out of Valdosta State, Schraeder latched on with the Falcons in 2013 and proceeded to start 73 games over the next six years. He signed a five-year, $31.5MM extension in 2016, but he’ll only complete a portion of that contract. Atlanta will now take on $3.8MM in dead money by releasing Schraeder, but the team will also open $3.95MM in cap space.

Schraeder will now join a free agent tackle class that’s mostly been picked over. Daryl Williams is still the best option on the market, while other 30-something tackles like Jared Veldheer, Jermey Parnell, and Joe Barksdale also remain available.