The Steelers are once again doing right by Ryan Shazier. The team is tolling his contract into 2019, with plans to eventually place him on the reserve/PUP list, according to Bob Labriola of Steelers.com. 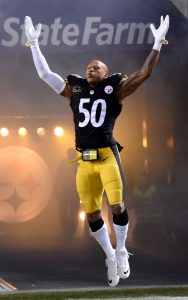 Shazier was nearly paralyzed after making a tackle in a now infamous 2017 game against the Bengals. Since then he’s undergone several surgeries as he continues the lengthy rehabilitation process. Pittsburgh’s move today ensures that Shazier “will be paid a salary commensurate with his years of service in the NFL, he will continue to accrue seasons toward his NFL players’ pension, and his medical insurance plan will be the same coverage that all active NFL players receive,” Labriola writes.

Shazier will be paid $473K in 2019, according to Albert Breer of SI.com (Twitter link). It’s a classy move by Steelers ownership, and they’ve stuck by the linebacker every step of the way. Shazier has remained around the team in an informal coaching role, and will continue to do so.

“We will continue to support Ryan’s efforts to return to play,” Steelers GM Kevin Colbert said in a statement. “Although he won’t be able to help us on the field in 2019, his leadership, insight, and emotional support have always been very valuable to us, and we look forward to his contributions in our pursuit of a championship.”

Shazier has remained steadfast in his insistence that he wants to return to the field one day, but it won’t be in 2019. A first round pick out of Ohio State in 2014, Shazier had blossomed into a star at the time of his injury.