The Colts have claimed Derrick Kindred off waivers, according to NFL.com’s Ian Rapoport (on Twitter). The safety was let go by the Browns on Monday, and the Colts pounced on the opportunity to add him and his inexpensive contract. 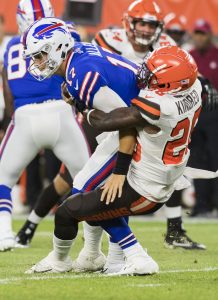 Kindred, 25, is set to make a little more than $2MM in 2019. At that price, he’s a relative bargain for a club that has been largely reluctant to part with its ample cap space this offseason.

Since entering the league as a 2016 fourth-round pick, Kindred has appeared in 42 games for Cleveland. Last year, he had a perfect attendance record and registered 45 tackles, one interception, and a forced fumble. The Browns’ decision to release him leaves the club with a hole at strong safety that it could look to fill via the draft.

The Colts, meanwhile, add a youthful and reasonably talented DB who will provide useful depth for the recently re-signed Clayton Geathers, who has a troublesome injury history. Kindred can also contribute on special teams.

4 comments on “Colts Claim Derrick Kindred Off Waivers From Browns”