Former Browns receiver Ricardo Louis has agreed to terms with the Dolphins on a one-year deal, a source tells Ian Rapoport of NFL.com (on Twitter). Louis, a holdover from the Sashi Brown era, was cut loose earlier this month as a part of the Browns’ spring cleaning. 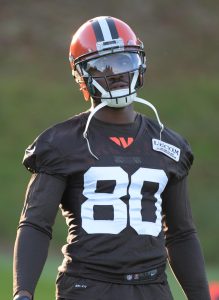 The former fourth-round pick missed the entire 2018 campaign with a neck injury and his status going into 2019 is not entirely clear. In 2017, Louis enjoyed the best season of his young career with 27 catches for 357 yards, a step up from his 18 grabs for 205 yards as a rookie.

If healthy, the 25-year-old could profile as a potent deep threat for the Dolphins’ new look offense. He’ll compete for Ryan Fitzpatrick‘s targets with DeVante Parker, Kenny Stills, Albert Wilson, Brice Butler, and others. The Dolphins might not win a ton of games in 2019, but Louis could be primed for a bounce-back season in Miami.