The Redskins are not only in disagreement about whether to select a quarterback with their top pick – they’re also not sure about which quarterback to select, Dianna Russini of ESPN.com (on Twitter) hears. Team president Bruce Allen and owner Dan Snyder are fixated on Dwayne Haskins, but there is a case being made in the building for Duke quarterback Daniel Jones, according to Russini’s sources. 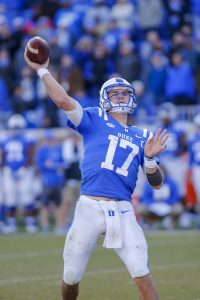 It would be troubling, to say the least, if the Redskins are indeed deeply fractured on which quarterback to take with just hours to go before the start of the NFL Draft. Picking at No. 15 overall, the Redskins need to quickly decide whether it’s Haskins or Jones that they want. Right now, it seems doubtful that Haskins will be available with the No. 15 choice, so Washington will probably have to move up into the top 10 if they want a shot at the Ohio State standout.

Jones, meanwhile, could potentially be had at No. 15, but nothing is guaranteed in the draft, particularly when it comes to QBs.

For now, the Redskins are set to go into 2019 with Case Keenum as their QB. Alex Smith, of course, is sidelined after his gruesome leg injury from last year and Colt McCoy is also working his way back from a broken leg of his own.