Steelers Acquire No. 10 From Broncos

We have a trade! The Broncos have traded the No. 10 pick to the Steelers, reports Ross Tucker of The Athletic (via Twitter). Pittsburgh has used the pick to select Michigan linebacker Devin Bush. 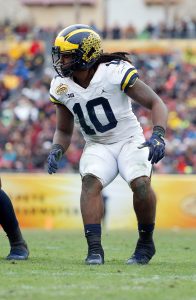 In exchange for the 10th-overall pick, the Broncos acquired three draft selections. ESPN’s Field Yates tweets that the Steelers will send Denver No. 20, No. 52, and a 2020 third-rounder.

Bush will provide the Steelers with a talented three-down linebacker who they can immediately insert into their starting lineup. Bush has shown an ability to thrive in both man-to-man and zone coverage, and he also flashed some pass-rushing prowess during his tenure at Michigan. The 20-year-old followed up a breakout 2017 campaign with another impressive season in 2018. Bush ultimately finished the year having compiled 41 tackles, 8.5 tackles for loss, and 4.5 sacks.

The Steelers currently have two former first-rounders, T.J. Watt and Bud Dupree, slotted in as starting linebackers. Bush will likely occupy one of the two inside spots alongside either Vince Williams or free agent addition Mark Barron.

Despite the offseason addition of veteran Joe Flacco, there were whispers that the Broncos could end up selecting a quarterback with the 10th pick. The team could still end up taking a signal-caller at No. 20, where a number of prospects should still be available. Either way, the trade allows the team to add some much needed depth.

19 comments on “Steelers Acquire No. 10 From Broncos”