Kyle Rudolph might not be a member of the Vikings for much longer. In an interview with Sid Hartman of the Star Tribune, Rudolph said there is “no way” he will accept a pay cut on his 2019 salary. 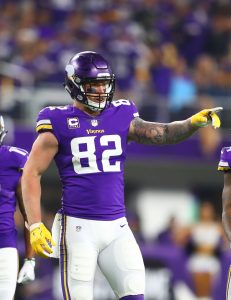 Rudolph, 30 in November, is slated to carry a $7.625MM cap number this year. However, that figure is completely non-guaranteed, so the Vikings can wipe his entire salary off of the books without cap ramifications.

Rudolph also reiterated that he wants to stay put and expressed enthusiasm about the offense under OC Kevin Stefanski and assistant head coach Gary Kubiak. But, given his contract, his refusal to adjust the contract, and the arrival of second-round tight end Irv Smith Jr., it seems likely that Rudolph will be traded or released this offseason.

The tight end had another productive season in 2018, hauling in 64 receptions for 634 yards and four scores.