The Vikings have offered a five-year extension to Kyle Rudolph that would make him one of the highest paid tight ends in terms of new-money average, a source tells PFT’s Mike Florio. However, there has not been much progress in talks. 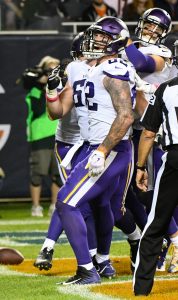 The proposed extension would likely reduce Rudolph’s $7.625MM cap number for 2019, but the veteran says there is “no way” he will take a pay cut. At the same time, Rudolph says he wants to stay with the Vikings.

The Vikings apparently want to keep Rudolph, though they have insurance after selecting Irv Smith Jr. in the second round of last month’s draft. Ideally, they’d like to have both of the well-rounded tight ends in the fold.

Last year, Rudolph had 64 receptions for 634 yards and four touchdowns. Even though many tight end needs around the league have been addressed, Rudolph would still find a strong market if released by Minnesota.