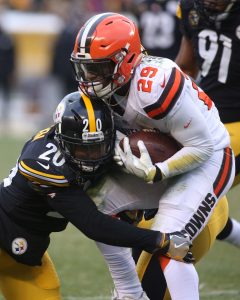 Johnson told reporters that he felt slighted by the Browns’ previous efforts to trade him and wants to be with a team that wants him. He added that he wants a trade sooner rather than later so that he can acclimate to his new club, though he softened things a bit by saying that he’ll still show up to play if he remains in Cleveland.

Johnson, a pass-catching whiz out of the backfield, doesn’t appear to be a major part of the team’s plans this season. Rising sophomore Nick Chubb figures to be the focal point of the team’s running game while new addition Kareem Hunt will take a large share of the carries once his eight-game suspension is through.

Johnson, meanwhile, has averaged roughly 59 catches and 543 yards per season. Even last year when he saw only 40 carries behind Chubb and Carlos Hyde, he still managed 47 grabs for 429 yards.