The only player picked ahead of Carson Wentz in the 2016 draft will naturally shift to the forefront now that the Eagles and Wentz finalized their extension agreement. If the Rams are on the clock, they might be there for a while.

When asked Friday on a Jared Goff timetable, Rams COO Kevin Demoff said (video link via Lindsey Thiry of ESPN.com) said the team’s goal on this front will be to assess this situation during the 2020 offseason. Two years remain on the 24-year-old passer’s deal. 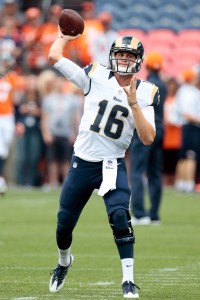 “I don’t want this to sound hollow, but I don’t think (the Wentz extension) affects our conversations that much,” Demoff said, via Thiry. “It’s been reported for a few months that the Eagles and Carson were talking about a contract. We were well aware of that, and they seem to be on a different timetable. I think people mistake timeline and getting deals done with multiple years left for commitment.

“This franchise is committed to Jared Goff. Your love for a player and how badly you want him doesn’t always come down to when they sign.”

Sean McVay also said recently (via Thiry) he is confident Goff will be the Rams’ quarterback for a “very long time,” despite the former No. 1 overall pick arriving during Jeff Fisher‘s final season. But the Rams’ recent run of re-ups — chief among them deals for Aaron Donald, Todd Gurley and Brandin Cooks — will make a 2019 Goff accord more difficult. Additionally, the Rams have Aqib Talib, Marcus Peters, Dante Fowler and Andrew Whitworth in contract years. Their cap space spikes from $6MM-plus to $54MM-plus (projected) between now and the 2020 offseason.

“I think the numbers would be tough, quite frankly,” Demoff said regarding a Goff extension being completed before this season.

Wentz’s deal included a $32MM new-money average and $66MM in full guarantees — fourth and fifth among quarterbacks, respectively. Goff has not been a late-season MVP candidate like Wentz was in 2017, but he is two years younger, coming off two Pro Bowls and has no significant injury history. This moving into the 2020 offseason would stand to point to Goff eclipsing Wentz’s numbers.