The Broncos’ situation with Drew Lock had created a holdup with the player selected one spot ahead of him, but that issue has been resolved. No. 41 overall pick Dalton Risner agreed to terms on his four-year rookie deal, Nicki Jhabvala of The Athletic tweets. 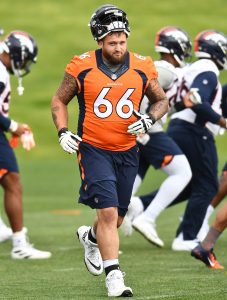 Risner is expected to sign the contract later on Tuesday. This leaves Lock as Denver’s only unsigned rookie. The two went off the board back-to-back in the second round, and Lock is reportedly seeking a “quarterback premium” contract. The first two years of Risner’s deal are fully guaranteed, per Mike Klis of 9News (on Twitter).

But the player from Denver’s draft class expected to contribute immediately will be available when the team opens training camp Thursday. Risner is slated to start at left guard for the Broncos, who will stash Lock behind Joe Flacco for the time being.

A well-regarded prospect out of Kansas State, Risner played multiple positions for the Wildcats. He served as the Big 12 program’s starting right tackle from 2016-18, earning first-team All-American acclaim as a senior, and began his career as a 13-game starter at center for the 2015 K-State iteration. Pro Football Focus tabbed Risner as a first-team All-American in his final two seasons. The Colorado native will attempt to help the Broncos up front, after they lost both Matt Paradis and Billy Turner in free agency.