Chargers running back Melvin Gordon has threatened to skip training camp and even potentially ask for a trade if he does not receive a long-term extension from the club. Furthermore, his agent says there is a possibility that he could extend a holdout into the regular season. Apparently, that’s more than just talk. 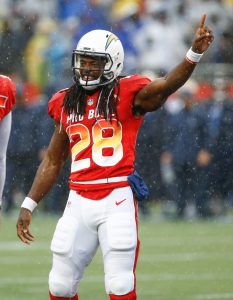 Last fall, when Sports Illustrated (Twitter link) spent a day with Gordon and his family, the running back was asked about his take on the Le’Veon Bell situation. Gordon’s father asked his son if he thought Bell would really sit out the entire year and the running back responded: “I would, too.”

“Come back and get hurt?,” Gordon asked, rhetorically. “Gave y’all everything he had for about five, six years. Y’all can’t pay the man?”

Gordon, meanwhile, has given the Chargers four years of service, including two Pro Bowl seasons. And, last year, he took a major step forward with an average of 5.1 yards per carry.

It’s debatable as to whether Bell’s stance paid off. Bell gave up $14.5MM on the Steelers’ 2018 franchise tag before signing a four-year, $52.5MM contract with $27MM fully guaranteed. It’s not quite the payday he had in mind, but a catastrophic injury would have prevented him from signing anything in that neighborhood.