The saga between the Chargers and running back Melvin Gordon could drag on for a while. There’s a “strong possibility” Gordon could sit out into the regular season unless he gets a new market-value deal, agent Damarius Bilbo tells Tom Pelissero of NFL.com (on Twitter). For what it’s worth, Bilbo did soften the threat a bit. 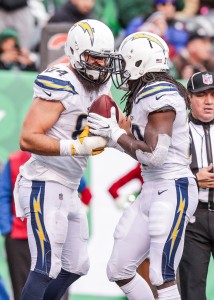 “But we want to focus on getting something done before training camp,” Bilbo said. “There’s a long way to go to Week 1.”

If Gordon’s holdout extends to the regular season, he’ll lose out on roughly $330K per week, representing 1/17th of his $5.6MM salary. Staying away from the club could reinforce his importance to the Chargers’ offense, though there’s a risk of backup Austin Ekeler shining in his absence. Last year, Ekeler was a revelation for the Chargers as well as points-per-reception fantasy football players – he finished out with 5.2 yards per carry on a limited sample and 39 catches for 404 yards out of the backfield.