The Giants will soon have their heir apparent quarterback under contract. They’ve agreed to terms with No. 6 overall pick Daniel Jones on his four-year rookie deal, Ian Rapoport of NFL.com tweets. The Duke product is set to receive all of his signing bonus this year, Rapoport adds (on Twitter). 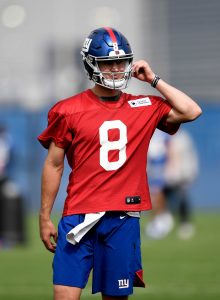 This completes the Giants’ 2019 draft class and trims the list of unsigned picks to four. Over the past three days, the Giants have come to terms with their final two holdouts — Jones and outside linebacker Oshane Ximines. Giants rookies begin work on Tuesday, and Jones will obviously be the centerpiece of those workouts. Veterans join practices Friday.

Jones, 22, worked as the Blue Devils’ starter for three seasons. The Giants saw enough to draft him at No. 6, rather than waiting until their No. 17 window opened. Having taken Jones over Dwayne Haskins and edge defender Josh Allen, Dave Gettleman has tethered himself to the scrutinized prospect.

Perhaps the most controversial pick of this year’s draft, Jones went off the board several picks before he was expected to. This prompted criticism directed at Gettleman, but the second-year Giants GM believes the former David Cutcliffe pupil will be the player to succeed Eli Manning. Jones impressed Giants brass this offseason, doing so to the point the team might only keep two quarterbacks on its active roster.