The Giants are down another receiver. ESPN’s Adam Schefter reports (via Twitter) that wideout Golden Tate has been suspended four games for violating the NFL’s Performance Enhancing Substance policy. Schefter notes that the veteran will appeal the suspension and “believes he has a legitimate case.” 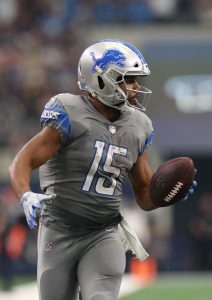 It’s been a tough week for Giants receivers. Former Browns first-rounder Corey Coleman tore his ACL yesterday, ending his season early. Meanwhile, top wideout Sterling Shepard will be out for the foreseeable future after fracturing his thumb. The Giants are still rostering the likes of Cody Latimer, Bennie Fowler, Russell Shepard and Darius Slayton, but the team will surely be looking for some reinforcement.

In fact, Greg Joyce and Jared Schwartz of the New York Post write that the Giants are set to host a workout for free agent receivers this weekend. That initial grouping of players included rookie Flynn Nagel and veteran Kelvin Benjamin, although ESPN’s Jordan Raanan tweets that Benjamin wasn’t among those auditioning this morning.

The Giants signed Tate to (partly) replace the production of traded wideout Odell Beckham Jr.. Between the Lions and Eagles, Tate hauled in 74 passes for 795 yards and four touchdowns in 2018. It was the first time he failed to crack 800 yards since the 2012 season. In New York, he’ll likely be one of Eli Manning‘s preferred targets alongside Shepard, tight end Evan Engram, and running back Saquon Barkley.