Jack Doyle had a breakout season in 2017, earning a Pro Bowl nod along the way. Unfortunately, the Colts tight end couldn’t build off that campaign, as he struggled with injuries throughout 2018. 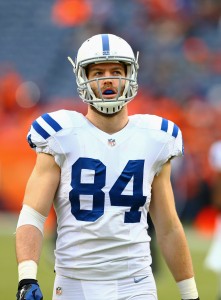 After appearing in the first two games of the season, Doyle missed the next five with a hip injury. The tight end made it back to the field for four games in October and November, but his season came to an end after he suffered a lacerated kidney. The 29-year-old ultimately finished the year having hauled in 26 receptions for 245 yards and two touchdowns in six games.

While Doyle was capable of running routes during the Colts offseason camp, he cautioned that he’s not targeting any specific return date.

“I really am trying to take it one day at a time, not rushing anything,” Doyle told Heather Bremer of The Herald Bulletin. “But I’m happy with where I’m at and happy with the progress I’ve made. It’s definitely going in the right direction, and when it’s time to get back out there, I’ll be excited to be back out there. I promise you that.”

While Doyle may not be ready for the start of training camp, that won’t stop offensive coordinator Nick Sirianni from gushing about the depth at tight end. Doyle will be joining Eric Ebron, who finished last season with a career-high 13 touchdowns. The team is also rostering Mo Alie-Cox, who showed some flashes last year.

“It’s exciting to know that he is making a full recovery from his hip, from his kidney and we are going to have the Jack Doyle that we had at the start last year,” Sirianni said.